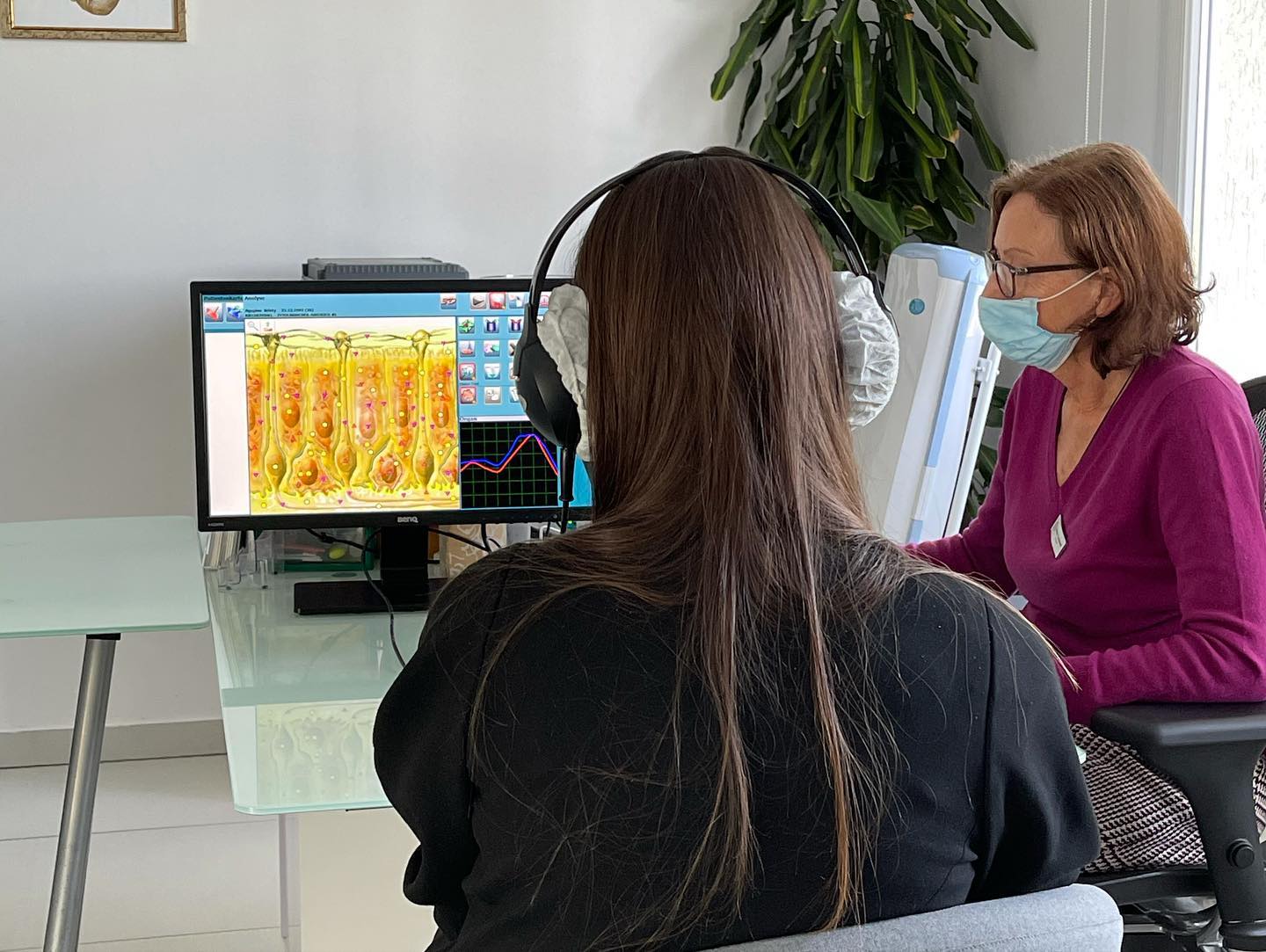 The Oberon Diagnostic Machine is an extraordinary non-invasive NLS device that ‘listens in’ on the body, measuring the vibrations of individual cells down to their molecular structure. The machine then compares the measured results with a stored and extensive database to reveal any abnormalities in tissues, cells or organs with up to 90% accuracy.

Depending on an individual’s health, a scan can take anywhere between 10 and 30 minutes – and we are delighted to announce that we now have the Oberon at Neomed.

How Does the NLS Diagnostic Work?

The Oberon is essentially a scanning device. Every organ and every cell in our body has an individual vibration and the Oberon records any deviations it finds from what is considered the ‘ideal’ state and evaluates them.

Our resident naturopath, Margit Taubmann, has been using the Oberon for the past 14 years.

“Over the years, I have found with this machine that if a patient comes in with blood test results from a conventional doctor, I will see the same results showing in the Oberon. So, while I was in Germany, I always used the Oberon for my first analysis because it gave me an overview of what is going on in the body.”

The Oberon is able to give a complete overview of a guest’s general health because the rotation of atoms in cells generates frequencies that the brain, as the control source of the body, picks up. The Oberon then records these frequencies and translates them into energy levels, graphs and coefficients. These organ-specific signals are picked up via a special headset, which has an in-built sensor, and the measurements are then compared with other measurements stored in a database from which deviations from the norm can be detected.

The machine is able to scan each organ or tissue on a cellular level to find out how stressed an organ is if there are any diseases developing anywhere or how much the cells are influenced by a specific disease. The device can also detect any imbalances or weaknesses that might lead to illness.

“If the body is suffering from silent inflammation, say, for example, arthritis, I can see this,” explains Margit. “I can see if problems in the gut are worse than problems in the kidneys, which would then influence my choice of treatment. What is also good about this machine is that I can show patients the whole process on a screen and talk them through everything I find.”

“The Oberon also shows me the mitochondria (membrane-bound cell organelles). While a blood test will also reveal the condition of the mitochondria, it cannot tell you in which organ they are causing problems, but with this machine, I can see where they are low, say in the kidneys or the liver.”

It isn’t only illnesses that the Oberon reveals; since parasites (bacteria, viruses and fungi) also have different vibration patterns, they can also be localised and determined. The Oberon will also help find suitable measures to eliminate them.

Allergies, food intolerances and environmental impacts such as toxins and heavy metals can also be recorded and analysed. And it isn’t only a one-way street; it’s possible to send healthy vibration frequencies to specific areas to enable self-healing. In this way, it is possible to look at and process the causes of physical and/or psychological symptoms holistically.

The Oberon is also said to be the only device in the world that can detect a “spectral analysis of turbulent magnetic fields” in living organisms and it can also measure the “bioelectric activity of brain neurons”.

Well, it is. The Oberon diagnostic machine has its origins in the Russian space programme that was developed within the Department of Medicine at the University of Omsk in Siberia. The Oberon is based on 20 years of basic research done by a number of teams who worked out, on normal individuals patterns of frequency responses that correspond to particular organs. They were also able to work out what the normal frequency response would be for any particular age of either male or female subjects of each organ. As the Oberon is used for assessing organ function and not structure, it bears no resemblance to an MRI, CT or Ultrasound scan, though results can also be seen on a monitor.

“In Russia, a lot of doctors are using this,” says Margit. “But even though it’s a very modern device it has much to do with the methods of traditional Chinese medicine in that all organs have a relationship with the brain. So, while a conventional doctor may prescribe medicine, say for a heart condition, the Oberon might reveal that it is actually the thyroid causing problems for the heart and so you’d prescribe the treatment accordingly.”

“It provides a faster diagnosis than blood tests,” says Margit. “There is no sense of trial and error and you don’t need so many laboratory tests. The whole analysis takes me about an hour. So, the big advantage of the Oberon is that gives me an overview, cutting out any need for a number of lab tests and giving a more exact way to find the right therapy because the software will show the recommended homoeopathic remedy or supplements and so on.

“The Oberon is also very easy to use and because it’s non-invasive you can use it on children. I have even used it on babies, though I put the headset, not on their heads, but their bodies.”

For more information on the Oberon or any of our therapies, please fill in the form below:

How to address gastritis?